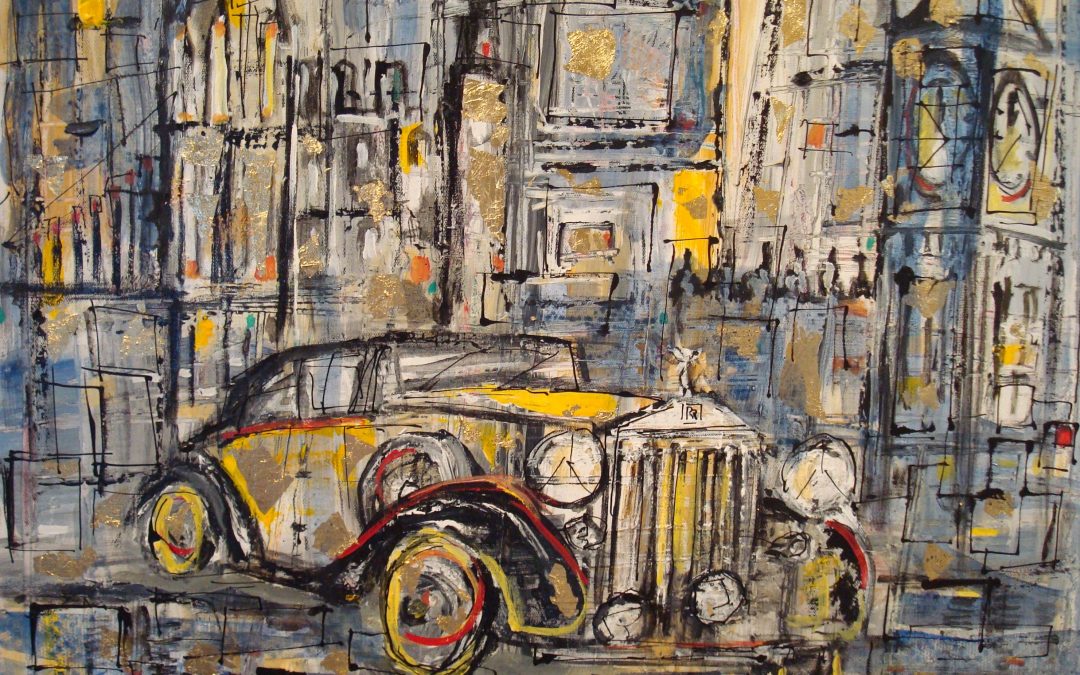 This is an unusual painting as it is a double dream in a way, based on one of the Rolls-Royce Silver Spurs which I owned for a decade. “Montague,” as I named the gold 1982 Rolls, had the original brown leather interior; the wood door sills needed re-varnishing (which I did) and the leather was cracked in places. The power seats did not work, but the engine was excellent with about 90,000 miles on it. I already had “Elinore,” who was (1981, the first year of fuel injection). I was writing a book about two cars, with the same name, but envisioned as Phantom III’s from the 1940’s. The names of course refer to Lord Montague and Eleanor Thornton (who ended up as the “flying lady” or spirit of ecstasy for Rolls-Royce motorcars). My Eleanor was a disaster in that, with half the miles, mechanical emergencies occurred constantly. Then Montague would have the exact same problem a few weeks later. But they were a touchstone for the fictional cars I was writing about.

I saw Montague advertised on E Bay motors, and drove down to Bird Key in Sarasota, where I met the owner, Jonathan, who owned an art gallery on St. Armand’s Circle. The car literally cried out from the curb, “Help me, please.” Jonathan was losing the gallery and moving to Budapest or somewhere in Europe. He explained that when he worked in London, he had always dreamed of owning a Rolls, even though he was advised that they needed “diapers” as leaking fluids were part of the character. If I had known then what I came to know in short order, there was no way I could have kept one on the road, let alone two. However, when Jonathan said, “I have a mechanic who comes to the house,” I was on board. That man, trained in England in Lancashire at the Rolls-Royce factory, became “family” for almost 10 years.

But, the dream….Rolls is so quintessentially British as the Union Jack and tea at 4.  I had been in England as a young professor of art history in California during the Christmas holidays, and fell in love. I felt so comfortable in London and the countryside, as if I had been there forever. The culture was so “pianissimo” and refined compared to “fortissimo” New York or Los Angeles.

So the Rolls somehow became a symbol of something that would transport me back to that experience. It was a touchstone, just as the granite and basalt chiseled boulders in Maine are for that part of me. Shakespeare said in the Tempest that “we are such stuff as dreams are made of.”  And that’s what the painting is really about. In this case the dream goes back to when I was between first and 6th grade. My dad was with the Henry Ford Museum/Greenfield Village and Lincoln-Mercury Design. The only Rolls in the museum had belonged to George V and had the heraldic standard and the claret color. I pretended my cousin’s rehabbed bicycle was really a car like that when I “drove” to school…over a mile each way. Also, I always wanted a pipe organ to play, and the Rolls was sort of like a pipe organ (all handmade and powerful!).

While I painted many “scenes” from the book, which has not been completed, I ended up being with a gallery in Paris, and life in England never happened. And then, having the studio and house in down east Maine and Tampa, life was too complicated for the Rolls-Royces to be maintained and driven. As I sought to comprehend spiritual Infinity to gain a progressive perspective on life, the focus changed. However, our dreams that reach into our earliest childhood are always there, and the Rollses that were stand-ins for my grandfather’s imposing Packard will always be in my heart. And I saw that on Jonathan’s face when he sold “Montague” to me. He always took his parents out to eat on Sundays, and he knew they would really miss the car. We shared a dream, and the joy of driving that motorcar gave us a sense of “being English” in a delightful way, like being in a movie or novel!

Esthetically, the background is consonant with the “blue denim” paintings of France done about the same time, with the muted blues and browns the weather off the Atlantic brings to the British Isles and Paris. The roughly outlined tower with Big Ben and the Thames gives a sense of place, and the cadmium red and yellow brushstrokes give the qualities of power and adventure of driving a Rolls. If history was ever on wheels, this is a poetic impression in paint that pays tribute to the ultimate motorcar. This painting, along with the other paintings of the last two decades may end up in the book when it is finally published!