Nostalgia or Persona? Antiquing in Maine 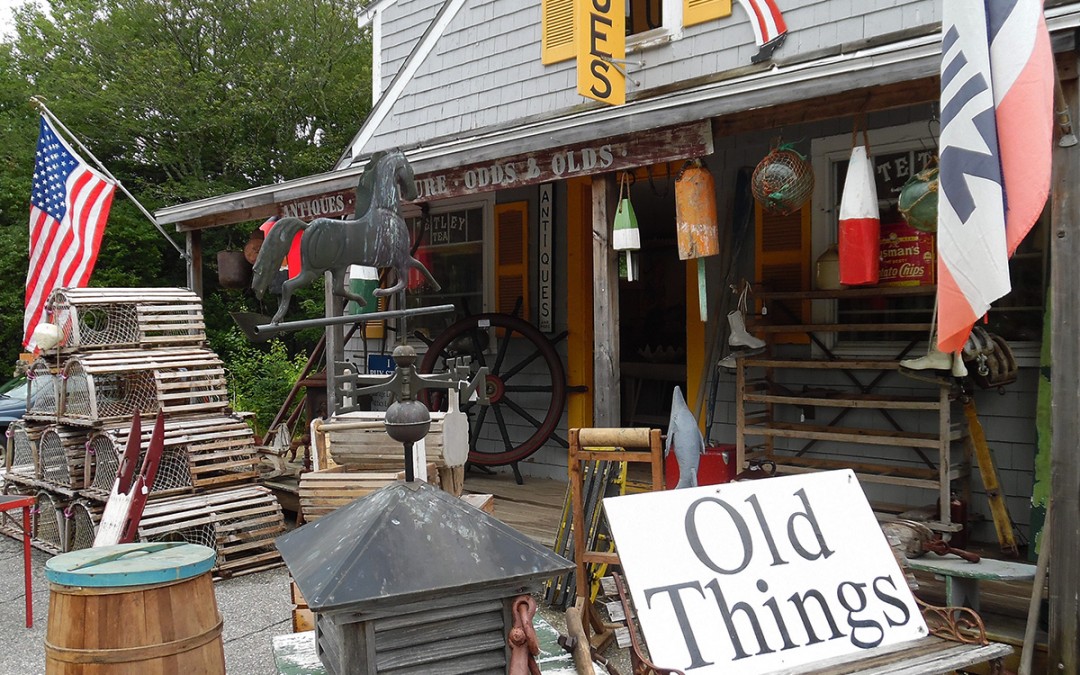 In the few weeks we have been “settling in” to our c. 1880 farmhouse down east, we have had to rely on Home Depot and Walmart in nearby Ellsworth for many necessities to make everything work. As we begin to discover local businesses, such as Viking lumber in Milbridge, and local markets, we are much more relaxed and appreciative of what is here. At the top of the list are two antique dealers, from whom we have made some wonderful additions to the house, one in Winter Harbor and the other less than half a mile away.

In the city, antique venues have an air of luxury and refinement, and one expects to pay rather high prices for period pieces (although the market has gone quite soft lately). In our corner of Maine, “antiques” takes on a fanciful and more adventurous aspect. Because Maine and New England in general has been so “picked over” for over two or three generations, I was unprepared for what is available, at very affordable prices. As people have moved to areas where the economy is more viable, the dealers here have acquired unique and unusual items from houses that have been sold, including items formerly classified as “junk” from attics and barns. The result is some great surprises for little more or less expense than mass produced and made-in-China items available in the chains that dominate most of this country today.

So, even though we brought up some wonderful “basics” that miraculously were “just right” and formed a harmonious esthetic kinship, we have added a vintage “Sheraton” sideboard of solid mahogany, a six foot by six foot fireplace mantle taken out of a house in Bar Harbor, two really great twin bed headboards from Goodwill (four dollars each), and even nicely weighted sterling silver salt and pepper shakers for only three times  the price of the ones from T.J. Maxx (with holes that are too large–how about a teaspoon of pepper on your fried egg!). 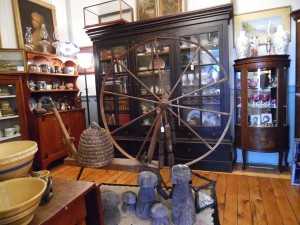 Do you have a craving for railroad “artifacts,” of maritime items such as a huge eel spear, a real ship’s wheel, hand carved wooden lobster buoys, a hand crafted anchor that you can barely lift up? What about an folding iron  portable day bed that can  wheel out onto a balcony?  Road signs from decades ago, kerosene lamps, ornate bird cages, and just so many things that show how people lived before computers and ubiquitous electronic devices. Like a wooden barrel completely made of wood (the staves and the rings) with a blue painted top, one-of-a-kind pieces of furniture that look like they were owned by farmers or tavern keepers from the 1700’s (made of really old wood but maybe only 60 years old and quite eccentric)….

To wander into these treasure troves of nostalgia is a kind of theatrical experience. You forget about the present, and are transported into a world of affordable pieces of the past. And each shop reflects the character of the owner, who selected the “merchandise,” and who can relate stories about an item and where it came from.  For example, we discovered what was left of a set of pink and white “china” (English ironstone) that depicted all kinds of ships on various pieces: a prison ship, schooners, steamships, etc. The story was that a woman wanted to surprise her husband (they lived in one of the “grand” summer houses here) and after she bought the set, asked him if there was anything he wouldn’t want for an anniversary gift. His reply, “pink china.”

As collectors who love hand crafted furniture to live with, we were talking to the dealer near us, and he mentioned how some pieces he just has to hold on to. He used the word “identity” as defining why. It’s sort of like the expression, “you are what you wear,” or “clothes make the man,” but this really involves a respect and appreciation of the quality of things made by hand  and highly “individual.” There is a “connection” to time, place, and human expression. It goes beyond nostalgia to “persona” or identity, and mirrors our consciousness of the creative aspect of both utilitarian and decorative products of the past. And best of all, the prices are really affordable!