So, Where do You Live? An Artist’s World 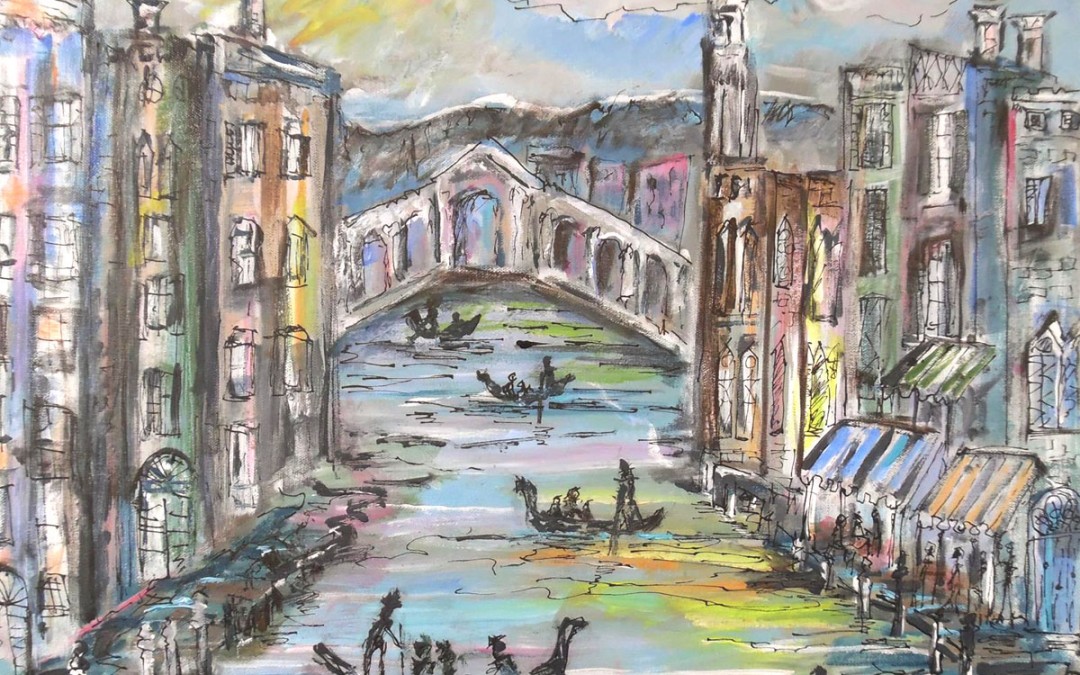 Marcel Proust wrote quite a long time ago that various scents would trigger a connection to things in our past…that a particular perfume or fragrance could connect us to a forgotten experience. This is also true of visual “reminders” as well. That’s what happened to me this year in Maine. Sounds and sights were keys to opening up an entire world I knew as a child, and brought those full circle to connect with the present.

That is why I decry the present adult and child involvement with the computerized world of today, where the “hands-on” element seems to be absent and unexplored. Push a key, type a phrase, it’s so quick and easy!  Limit comments on “Facebook” to “so cool” or “that’s great.”  Life has seemingly become a world where the sense of smell does not have a place, where physical effort is needless, and “pictures” are strictly visual.

So I became quite perplexed when a friend recently wanted to buy a painting that was on my website that had sold some years ago.  Because it could prove difficult to retrieve it from the  owner, and because we had no high resolution digital images, there was no chance of creating a giclee for our friend.  I thought, “I’ll just do another one from the image on the computer, and have it ready for Christmas.”  But there was a problem: that painting was an “odditie” in the watercolors and acrylics I painted after being in Venice (Italy) in November when our oldest son was just learning to walk. We had found an entire floor of a palazzo that overlooks the Rialto bridge, which came with five marble balustraded balconies and even a servant’s suite. I wrote many poems, but painted later in the Tampa studio, as is my custom. Somehow, it is difficult for me to work from what is in front of me, as opposed to recollecting images once I am home. 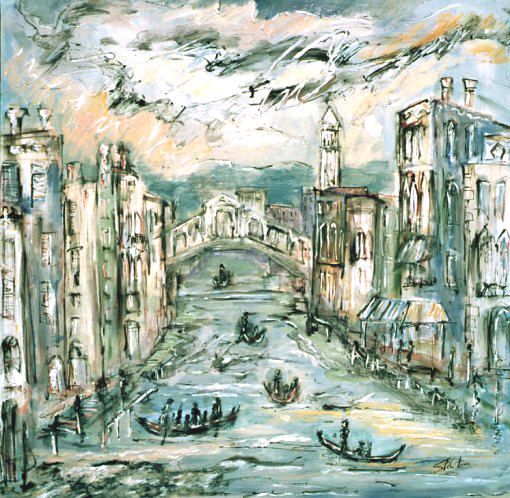 As I began working on the new canvas, I found that Venice had vanished!  Down east was where I live now (besides Florida), I was still subject to the tides, the rocks, and the colors of the Schoodic peninsula…not to mention the smell of pine, bay, and kelp. So books and photographs were supposed to come to the rescue, but that ended up being a double-edged sword. There were the “babies,” who are now teen-agers, and it left me wondering where those adorable, cute, picture-perfect kids had gone…. And all the Great Danes that had passed on, as well as family members. Well, I started on the painting anyway, but Venice seemed really far away in a mist more mysterious than the fog that embraces the Gulf of Maine. Even worse, the friend brought over a huge quartz crystal bowl with a rod to make it “sing,” and the F#  seemed to be the same note as the Mark Island buoy and the foghorn combined!  I found a wonderful CD of Gregorian chant to calm down the wave of Christmas carols and other gorgeous works played on our 24 hour classical music station broadcast from Sarasota. That helped. Oh, if I could only get a whiff of that old, old wood in the palazzo, that had the scent of  medieval European cathedral choir stalls!

Further complications ensued. In the original painting, I had set the Grand Canal in front of the Dolomites, which I remember seeing as the plane from Milan landed near Venice. When I typed in “dolomites seen from Venice”, the computer images were not what I remembered seeing at all. How to remember that initial response to seeing the mountains so close to Venice…I had entered Venice many years ago by train…a different experience entirely. Then the ride in the mahogany boat into Venice. Oh, try, try to remember every detail!  Very high tides, too. Well, the colors, the light, the nuances were as varied as my experiences in the Sierra or Death Valley, but specific to this city floating on water!  It was thirteen years ago?  Where has time gone!  How did it get to be 2015…and almost the end of that year, too?

I put a large picture of the original painting above the canvas on the easel, and noted that the colors were way off. That didn’t help either. I worked the colors to approximate what might have been, but they seemed to go in a different direction. The deep fog must have been blown away by the resonating vibrations from the crystal bowl!  Now there were patches of sunlight, and just one intense patch of blue in the sky. I stopped looking at the picture of the original painting, and gave up looking at the books I’d hauled in suitcases over wooden walkways to get on the boat to the airport, with the baby stroller and the masks, and all twelve pieces of luggage.

Now I was finished with the colors of the sky, the water, and the buildings. The fourth layer would be black lines, and instead of adding a wet brush to them, I used my fingers to achieve variation. All of a sudden I was back in Venice, and the painting was coming together in the most wonderful way! 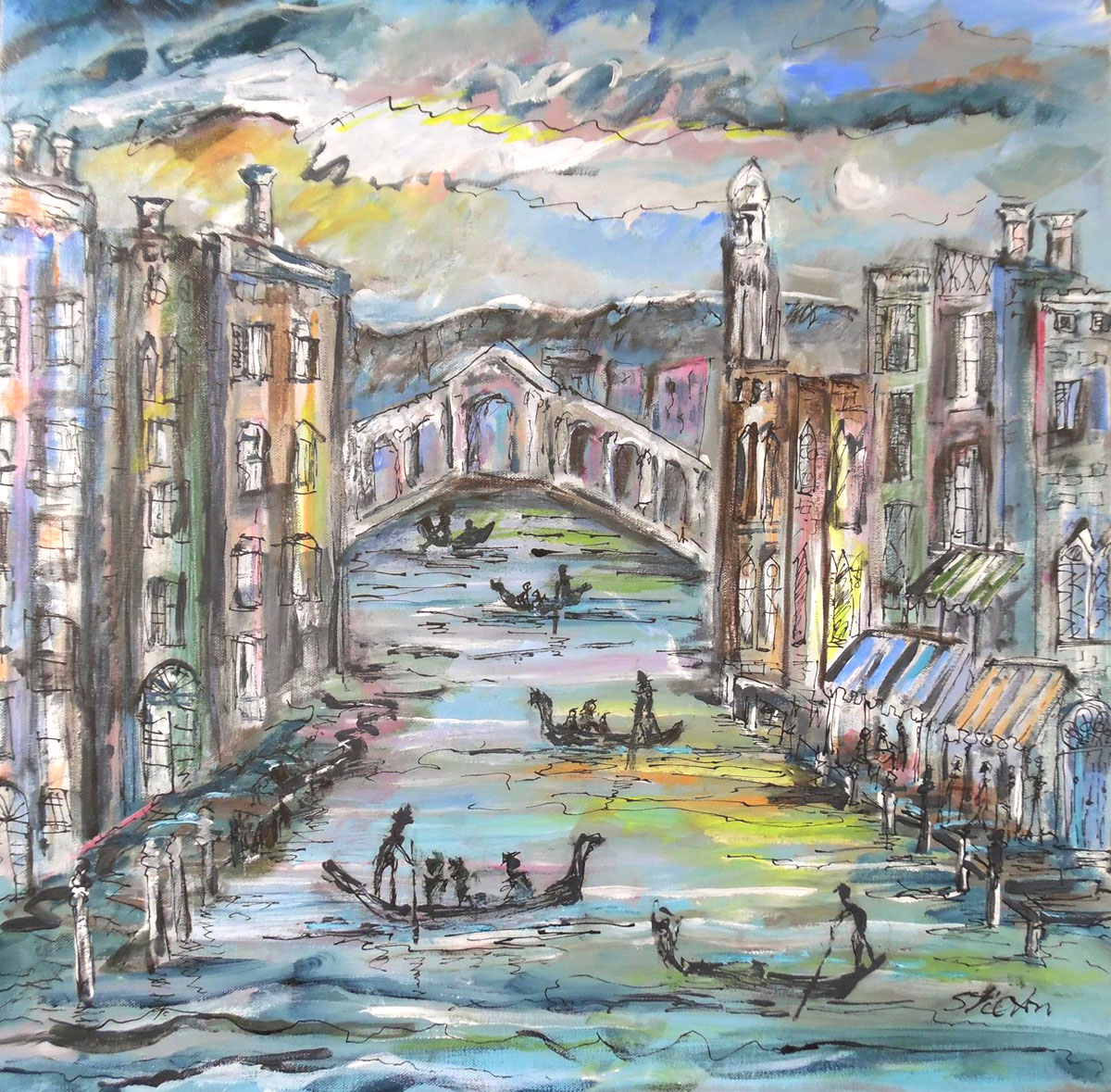 What this experience proves to me is that the artist lives in his own world of imagination and things “lived.” These are retrievable, but only in a “hands-on” way. So, there it is. Yes, I live in Carrollwood, and yes, I live on the Schoodic peninsula. But really, I live everywhere I have resided or visited….but I can only live there, really, in my paintings. It is the physicality of the palette knife, the brushes, and the canvas or paper that allows me to build my world. And I count that as a huge blessing!

Oh, just an illuminating postscript. The recipient of the painting, a gift from his fiancé, just came over to explain how much he loved the new painting. He had really wanted the first one, but his wife at that time didn’t, so I sold it to one of my collectors. The first thing he said was that when he saw the new painting, he could “smell” Venice. I asked him to repeat what he had stated, which he did. Then he said, “it was the food, of course, the salty scent of the brackish water, and the smell of the glass furnaces.”  Once again, I was amazed, and must acknowledge that the first lines in the Gospel of John are absolute truth. They relate the infinite range of one Mind, ever operative and ever present. 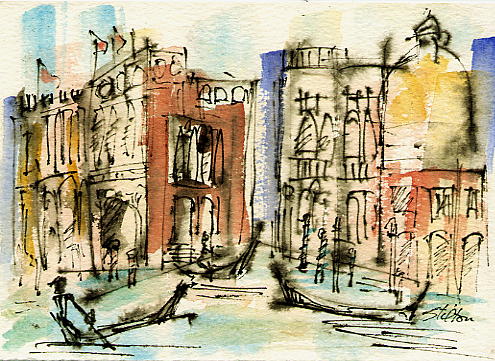