The Best Clam Chowder I Ever Tasted 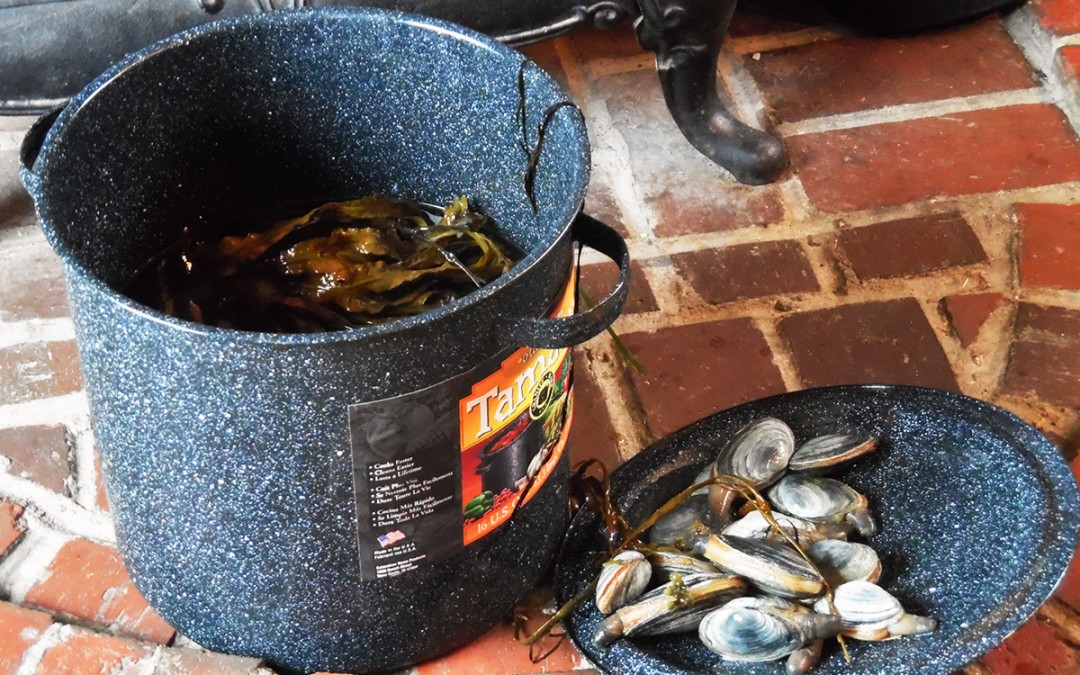 This is a post about a learning curve of living down east, when our neighbor Patrick brought over a clam basket that his dad had brought home. I have seen a documentary about digging for clams, and decided it was definitely not something I would ever attempt. I felt very honored to be the recipient of someone else’s hard work, and was very grateful for such a friendly neighborly gesture. We were out in front, with a water hose the boys were turning on each other, on the warmest day of the year. We began hosing the clams down in the wire basket, and an endless stream of mud flat silt and sand was washed off the clams. I remembered that it was difficult to get clams to the table without sand (grit), so I asked Patrick what to do– he has answers to all my questions, whether they have to do with my “new” 20 year old red truck, how to sensibly tackle many tasks regarding the house and barn, and so forth. When pressed, he offered that we should put them in salt water overnight in the refrigerator, so that they would be “purged.”  I was glad we saved the old refrigerator, and had it moved to the basement when the new one was delivered. The clams filled a very large bucket, and I was puzzled as to how much salt should be added to the water.  My neighbor’s response was direct: “get some water from the ocean.” 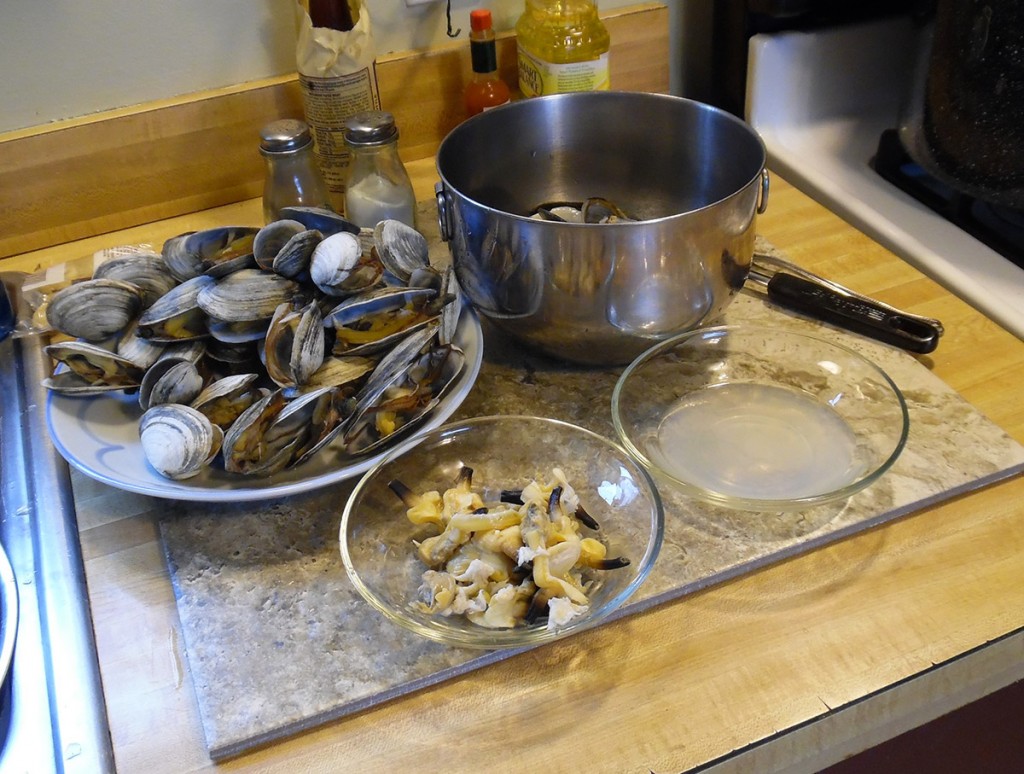 I felt rather imbecilic…of course, how logical. Immediately I jumped mentally to whether the tide would be high or low. Then, where could I access the sea..near the lighthouse down the road, at the harbor, all the way to the park?  Jill and I jumped in the car, with a huge orange Home Depot bucket upright in the front seat, covered with a metal mixing bowl.

I got as far as the Dorcas Library, which has a lovely view of Prospect Harbor and the lighthouse, and got out of the car. Jill ran into the library to see if she could make a copy of an e-mail, and I proceeded toward the water. I quickly realized that the library property did not extend to the water, and I was walking through someone’s yard. From the porch I heard the a lady  shouting their dogs were loose, but they were just curious– and I was graciously permitted to go down to the shore. The large rocks were either dry, or wet and slippery, and it was difficult to figure out how to find a way to fill the bucket without falling into the harbor.  I finally managed, but the bucket weighed a ton!  Plus, the setting sun was literally blasting my eyes so that I couldn’t see anything, except some small doggie doos that were unavoidable. The lady on the porch sang out, “do you need help?”  I thought that was most kind, and replied that I would just stop a few times (when I saw her a day later in one of the antique shops, she told me she had been dog sitting).  Anyway, I made it to a bench near the car, and waited a long time for Jill, as the sun sank almost to the horizon. When we arrived home and emptied the water over the clams, it turned out that we only needed half the sea water I’d managed to “bucket” with the large mixing bowl.

Fast forward to the next evening. Jill picked up a bowl of fish chowder from “The Two Sisters Café” right across from the library. It was very foggy and “Brigadoonesque” as we drove back to the house in our truck that has an inherited tailgate sticker urging “eat lobster.” I collapsed on the green leather couch while Jill got the clams up from the basement, and started the process of adding them to the fish chowder. I heard her cries of dismay when one squirted her, and she was somewhat shaken by their moving parts. At this point I had decided to find recipes and ways to add clams to chowder on the internet, and I rushed to the kitchen with helpful insights.

The preparation is massive!  We had one pan for steaming, the sink for cleaning, one bowl for the discarded parts, one for the shells (I save them for “middens”), and one for the clams…oh, and a colander to help obtain the “juice” for the chowder. It was organized pandemonium, as we had run out of counter space. Trying to console her in the midst of chaos, I said,”now you see why restaurant’s are so expensive for this cuisine…it is beaucoup preparation, really.” 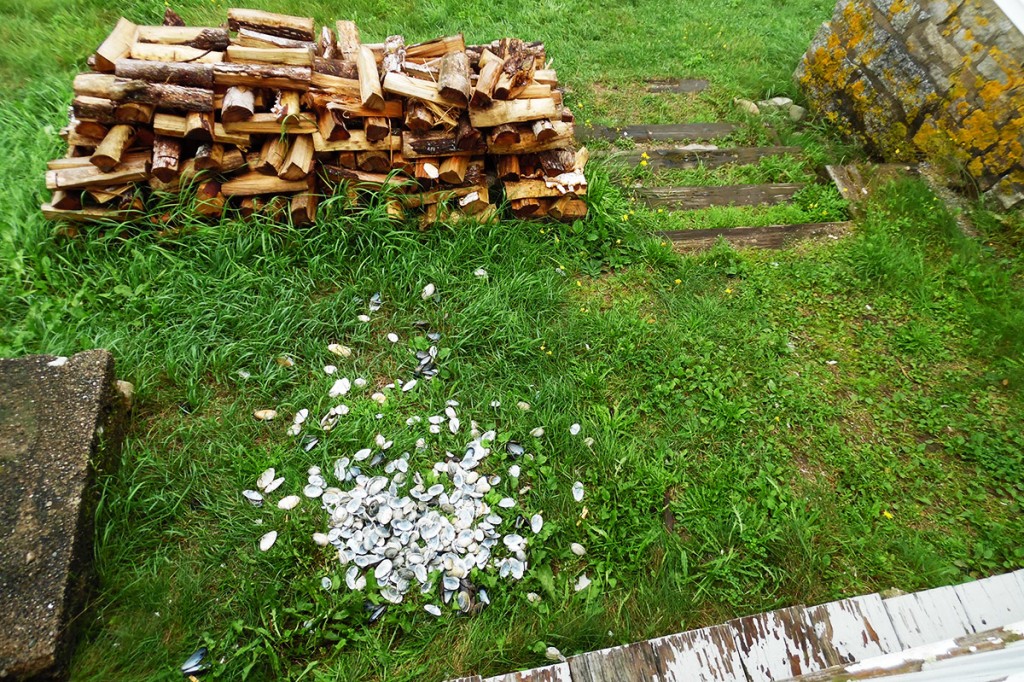 After a taste, I asked, “why do I detect maple syrup?”  We had no tarragon, which I had found out from a chef in Cape Porpoise years ago was a “secret” ingredient in his chowder. “Hot sauce,” I said, “and more black pepper.”  Now I am on the computer halfway across the house, yelling “celery, parsley, garlic cloves…” none of which we had. Back in the kitchen, I asked again, “why does it have a maple flavor?”  She said, “it was the maple flavored bacon I added that Philip and Matthew like.”

One more taste, and I had to declare that it was the best clam chowder I had ever, ever, tasted. It was stellar! Only Jill could have pulled something like that off. She always tells me that she learned to combine all sorts of things from my mom. There is no end to her successful experimentation, but this outshone them all!

“Now,” she said, “what are we going to do with all the rest of the clams that are still in the refrigerator?” As I emptied the shells over the porch railing, I replied, “we’ll make more chowder tomorrow, and I’ll photograph the process and post it!  All’s well that ends well!