The COLOR of Color 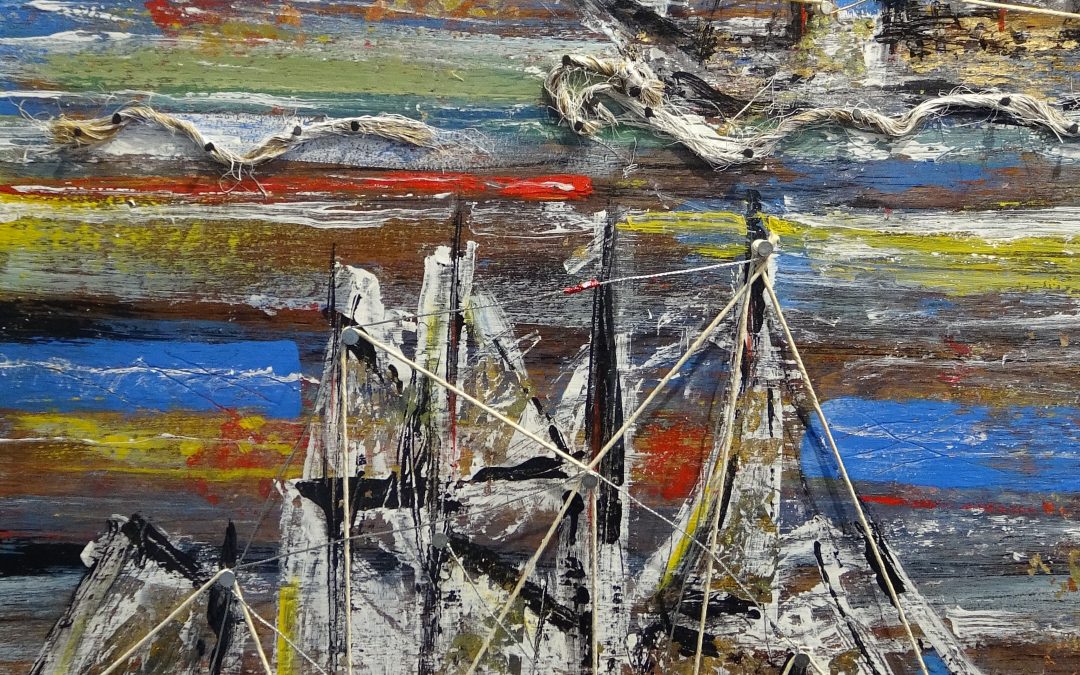 Today was a day of dreary grey clouds and with the temperature around 52F all day, it was winter.

I used colors right out of the can to finish a painting that had many unconscious references to Schoodic Point and Frenchman Bay. I needed color in the worst way to fight the demons of greyness.  John Greenleaf Whittier wrote about the kind of sun we had today:

The sun that brief December day

Rose cheerless over hills of gray,

And, darkly circled, gave at noon,

A sadder light than waning moon.

As I contemplated the new painting, with other work in the living room, I questioned the lack of subtlety and “pianissimo” in this rather bombastic depiction of three ships with two horizons. I even recalled the work of Georges Rouault, and was thinking of how much his work inspired me when very young, and the poem I wrote about the stained glass “shadows” on the floor of St. Severin in Paris.

I had improvised on the almost 100 year old pipe organ in our church downtown a few days ago, and ended up naming the piece “The Heavenly City.” It also made me think of the first chapter of Genesis. The organ’s voices create a huge energized space that can be awesomely deep and cavernous, but the flutes and celeste stops bring in almost piercing rays of intense light that lift us higher.

Then I thought of medieval France and England, and how the browns and greens, and grey skies from the Atlantic Ocean, cast a pall on so many days of the year. And now, think of how accessible color is in our modern culture, often backlit from the computer monitor, in automobile colors that stun with choices that keep getting more sophisticated and beautiful. We can go to Lowe’s or Home Depot and get paints in kaleidoscopic hues from the most dramatic to the most subtle.

Not so for the medieval peasant, living in an almost “sepia” monotone environment with hours of darkness where firelight and the moon were often minimal. As he entered Chartres Cathedral the color would have stunned the peasant, as well as the feudal aristocracy. The stained glass, like jewels, radiate a depth of color that one can enter into, a palpable experience. The depth of the colors is like an immersion, as when I swam in the Aegean Sea, reveling in the “mother” of all blue.

Had I not been working with a painting that yesterday was striking in its value contrasts from white to black against the happy reds and purples of the garden flowers, and experienced the grim scene today—I probably wouldn’t have thought about this sense of color. There is an apocalyptic message conveyed by color, and like a rainbow, it awakens our spiritual perception to see beyond any hint of deprivation or darkness.