The Mystery of the Three Artists not All Named Stilton 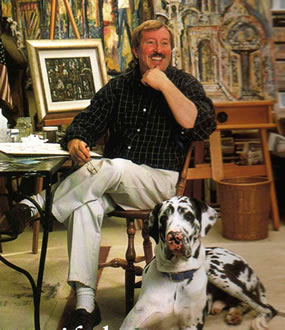 Many people have visited our studio in Tampa. This has included nuclear physicists from Moscow, the former French Consul for the Bahamas and Florida (who went on the be ambassador to China), composers, and even little neighborhood children.  But this story has a purpose in solving a mystery to which few have the key.

Several years ago we had Chinese visitors, who were brought to us by a couple from New York–the wife sold high end art in that city, and the husband was Madame Chiang Kai-Shek’s lawyer.

I am a very shy person when it comes to selling or explaining my art, so when guests used to visit the studio, where at least 100 paintings were on rotating display, I would “hide.”  Specifically, Jill would greet visitors at the front door, or at what was then the garden entrance, and take them on a tour. An hour or so later, they would come into the studio, where I would be working. This allowed me productive time, plus the added bonus that everybody loves seeing an artist at work. Depending on their background, they can study an artist’s work, and analyze the processes and techniques involved–which seems to give art lovers great pleasure. To an artist, it is “work,” and acquired skills that are employed for desired effects; but to the “aficianado” it is “sleuthing.”

Anyway, to get back to the story. Into the studio come several Chinese art collectors, all so excited with smiling faces. One said to me, “your wife has shown us your paintings, and the other two artists who were influenced by you!”  We do collect other artist’s work, but they were rarely displayed at that time. I was puzzled for a few moments, and then I realized what had happened.  Unlike anyone else that had looked carefully at my work, they had noticed that I had used three different signatures! Truly discerning art connoisseurs!

Yes, I have painted under three names!  It’s not really so mysterious after all: I used my birth name for much of my life until 1982, when we moved to Florida.  My father was one of the “famous” Alfred potters, Peter A. Slusarski.  His parents had come to the United States from Poland when they were young.  As a boy, he went to a Catholic school where Polish was the principal language. That served him well, when later in life, he went to Poland as a Kosciuszko  fellow on a university sabbatical.

My mother, on the other hand, traced her ancestry back to a time before the American Revolution, with Carpenters, McEachrons, Simonses, and Fullers. Because one of the McEachron ancestors married a native American (Iroquois) with a Christian name of Mary Jane Palmer, my mom loved wearing a feather stuck through the bun when she wore her hair “up.”  When a neighbor in Kent came to the house when we first moved there, and invited her to join the Daughters of the American Revolution, she drew herself up to the maximum height her short stature would allow, and stated, “my ancestors MET the Mayflower!”

Sorry, I digress.  In Los Angeles, no one had problems pronouncing “Slusarski,” and many thought it was Japanese!  But when I moved to Seneca Falls, N.Y. most people just couldn’t handle pronouncing it.   So, after marriage, Jill and I were always known as “Jill and Peter” No Name.  In the meantime, I had taken French at the Universite de Montreal to be able to graduate from Kent.  That summer, I began using the name “Serrurier.”  Why?  Simply this: Slusarski means “locksmith” or “metalworker,” so I just translated it into French, and it seemed to suit me just fine.

When we were getting ready to leave New York state for Florida, I decided that I really needed a name that could be easily pronounced and spelled. While I was preparing to take Jill to the Rochester  airport (when she was commuting between our home in Waterloo and Tampa to work with the family’s Maison de Nora business), my eyes fell on a Psalm which speaks of “still waters.” Since all our linens were monogrammed, Jill’s instructions were “whatever name we come up with, it must start with the letter “s”.  Oh, and it would be good to end in “ton.”  Well, there it was, “Stilton.”  We had discovered the cheese by that name, and of course loved it. But….how many people had that name?  So on my way back from the airport, I stopped at the Hobart/William Smith College library and looked for that name in all the phone books of major cities. No Stiltons!  Remember, this is before computers and the internet access we have today. And there are only a few Stiltons in the world, and one is actually Peter Stilton, an art history professor in the UK.  Well, that’s how we changed our name, legally of course, but only our family and friends were aware.

So that is the mystery of the three artists who were all me, solved.  Here in Tampa, though, many people can’t hear or spell Stilton. I have been thinking….no, I think I will stay with it.  It’s like the old Rolls-Royces.  Maybe a little worn and aromatic, but quite comfortable and in good taste.