Throw me a Curve, Jack 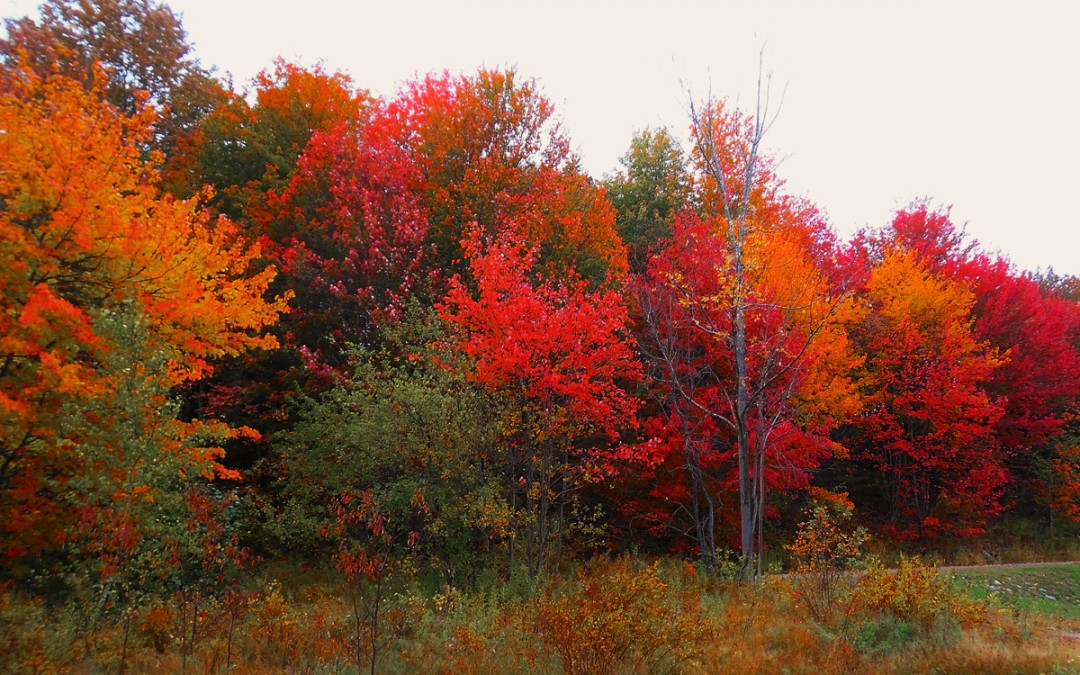 Well, Jack Frost really messed me up more than I thought. If you remember one of the first posts I wrote when I moved down east in June– I was fascinated with the Schoodic rocks. And I was focused on “line.”  Remember the black snake, the black rock that ran in veins through the granite?  I kept thinking how it might continue like the road, all the way to our farm house at the head of West Bay. Upward from the sea in an up and down roller coaster ride, sashaying to the left and the right, a sinuous curving drive that scared the heck out of me when I first drove the truck before the shocks were replaced. 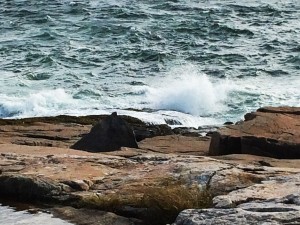 Then I discovered that the grid lines of the rocks didn’t just go north and south (east and west here–that’s why we’re “down east” as north becomes east–we’re the first to see the sun rise in the United States, but we see it sideways if you know what I mean). I started to see that the strata, tilted 90 degrees upright, ran in all directions as the magna must have run that way. Following that awareness, the high surf redefined waves too. You know, Hokusai’s wave in front of Mt. Fuji, for example…the perfect curvilinear triangular mass of water. And on the east side of the point, the waves roll in as continuous “perfect” waves at all times. But on the point itself, I saw just about every configuration imaginable. Circular tilted wheels,  moving pyramids , arabesque explosions–as unique  as those glacial “erratics” that share the coast with the volcanic rock. 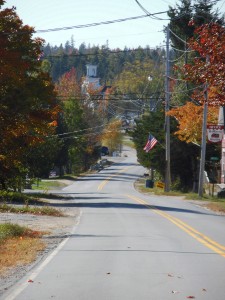 Then I noticed something else. As the leaves started changing, my perception of the road between the house and the shore was transformed. It became very clear that there were hills that gave the landscape a quality of a rumpled quilt. It was as if all my straight lines started to curve.  I never saw that really high hill behind the church in Prospect Harbor, over toward Birch Harbor, past that switchback that the road makes by the docks to take you out of town. I watched oncoming cars, few as they are, actually disappear for several seconds and then reappear seemingly out of nowhere. In my rearview mirror, white church steeples and other landmarks vanished a short way down the road. Obviously nothing had geographically changed, so why had my vision?

Then I caught what was happening. It was Jack Frost again, playing with me. As the colors of the leaves change from a more or less uniform green, they rearrange themselves in different planes. If you want to really understand this, check out Josef Albers theory of the relativity of color (which he taught his students at Yale years ago). If, as an example, you put a red on orange, it will stay pretty close together, provided the value (light or dark intensity) is similar. But put that red on green, and, to use a current expression, “it pops!”  The reason is that the eye cannot see two colors that are complements at the same time, so the “high poppers” are red and green, orange and blue, and purple and yellow. Ah, now you know why so many cereal boxes have those colors in the grocery store–they jump out at you!  Same thing with the leaves. Notice the yellow leaves against the blue blue sky. Zing, they sing!  Even at sunset I noticed the white surf had green tints. See what Albers does to explain  how various combinations of color (hues) and values change your perception of space ( like “disappearing” boundaries between colors). I could see that high hill in Birch Harbor because of the red colors that stood out from far away!

You can tell I loved teaching my university and elementary students some of these ideas. But let’s get back to the hills here. It’s about “layers.”  In nature, even Jack doesn’t use spray paint such as is used on automobiles and other manufactured products. No, a red apple, for example, usually has some dark red, some pink, some green even…the values and color are collaborative. 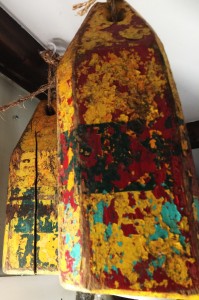 Take a deciduous forest, and there’s a lot going on!  So instead of seeing a forest of green, where you can’t see the trees for the forest (or something like that), the colors begin to adjust to different planes in terms of where you see them. The reds come forward, the browns recede, for example. Against a blue sky, the orange advances the most, but in the rain today the red shot out in front. And so on. This is impasto in nature, where Jack has used layers of colors on each tree with his paintbrush!  I told you the guy was tricky! And all of this is like theatrical scrims (veils) which enhance depth. We see in “layers” from foreground to middle ground to distance.

All this relates to the wonderful antique hand carved and many-times-repainted painted lobster buoys that are hanging in the kitchen…I nearly cried when someone bought one of my favorite at West Bay Antiques yesterday…but I couldn’t buy them all.  In fact the paint was so loaded, like a Van Gogh or even some Stiltons, that it started flaking off on the car seat on the 2 minute drive to the house. I quickly and carefully ran up to the watercolor studio with them, and used my smallest palette knife and casein glue to gently secure many  tiny flakes before they fell off.

The leaves are already falling in dizzy gentle spirals to earth. I can’t rescue them. I’m just enjoying the layers of color that Jack provided, giving  a straight line a curve, giving it a freedom that takes it from the mundane to the sublime…fireworks of color creating a new dimension, glowing even brighter in the cold persistent rain! 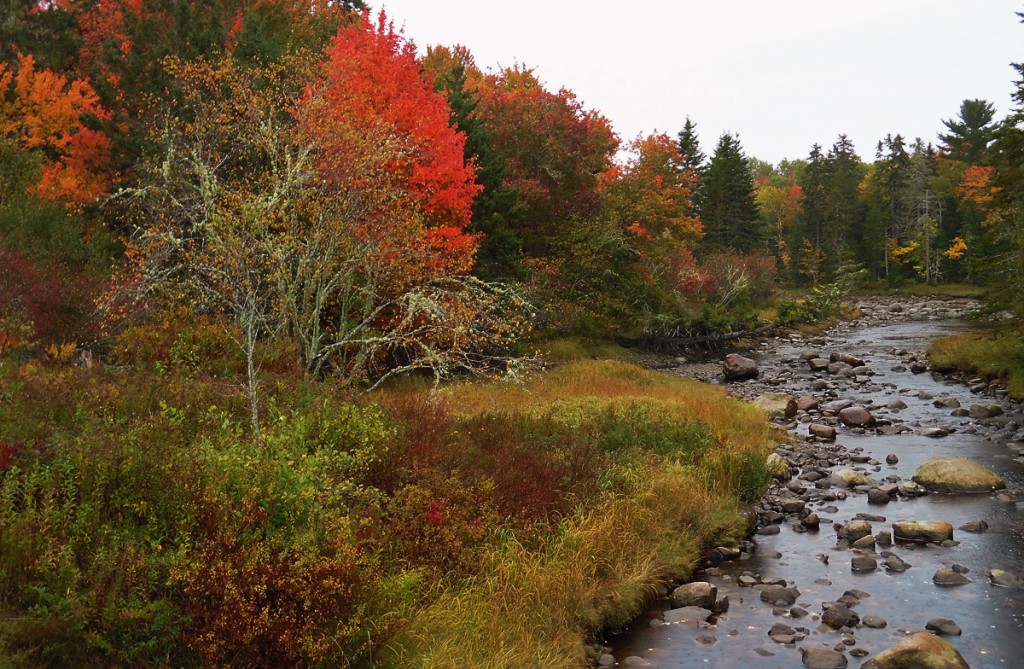