What Happens When an Artist Bites Off More than He Can Chew? 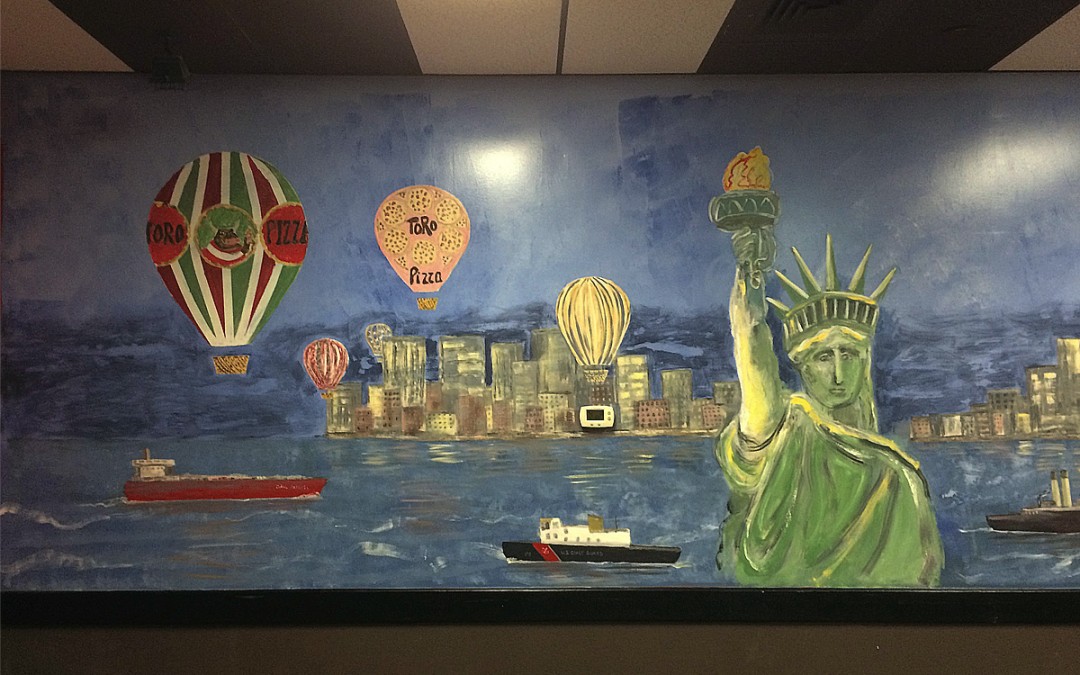 Let’s just say for fun that most artists, like me, think of doing paintings in terms of the length of your arm. The smaller the painting, the less body movement occurs when executing brush strokes. The larger paintings require a stable floor or scaffold from which to work, as the artist might end up falling otherwise. I do enjoy a variety of formats, but I have to say that I really met my match recently.

I was commissioned to do a “mural” on a wall that I thought was approximately 7 feet by 35.  It began about 3 feet up from the floor, and went to the ceiling. Unfortunately the length ended up over 50 feet. The location resembled a bomb shelter, and there were only a few fluorescent light panels in the ceiling. It had been a sandwich shop, and was about to become a pizzeria– with an Italian name…and a New York city theme. The owner already had a pizza place called “Times Square Pizza,” near us, with  a large mural in three or four panels depicting the Statue of Liberty, a large yellow checkered cab, and detailed buildings with water towers (one of my favorite visual anomalies in that city). The artist had gone back to New York, and the owner of the restaurant had seen the faux brick floor I had done for our friend down the street (see the earlier post, “Friend or Faux” almost a year ago  last spring).

I envisioned something at night, unlike the existing  mural, and not having a huge pizza flying through the sky over the Brooklyn Bridge. The owner wanted broad daylight, however, and a pizza coming out of the statue’s torch. His sister, who is a marvel to watch in her kinetic creation of a thin crust pizza nixed that idea, fortunately, Since the new place was to be called “Pizza Toro,” a bull was to be coming off the Brooklyn Bridge scattering pizza boxes. That would add a cartoon element, for sure.

O.K. So my idea of colored beams of light, neon signs and bright lights shining from the windows of darkened buildings was out. But the huge concern was how to construct a “panorama” with no architectural breaks from the front to the narrow hall in the back where the rest rooms are located. There was a large rickety stepladder available, which swayed unless it was propped against the wall. That of course, precluded painting the wall in that area, and somehow I was supposed to paint with an extension such as is used with  a paint roller. I was undaunted at this point, having worked with theatre sets for years when I was a youngish professor at Eisenhower College in upstate New York (the summer Gilbert and Sullivan operettas were my favorite, but I enjoyed doing all the sets).

The walls were a bright intense red. So I thought, let’s start with a bucket of white, and the best-almost-Cerulean blue I could choose, and I attacked the space. I crisscrossed the roller on the extension pole, and blended in a huge cloud and sky area. Then, below, I added some black and green, and white caps with the roller to create the East River. So far, so good. The owner remarked that blue was an unappetizing color, but he had specified water. Don’t even ask me what I said in response. Anyway, the whole space, with these two horizontal bands opened up the dimly lit space and it looked three times larger already. 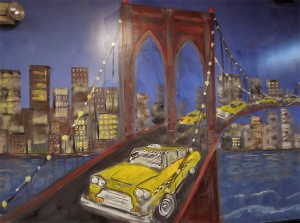 Then the problems started to multiply. As you may know, the East River curves. Manhattan is a grid, but the river is not. It’s kind of like Paris…buildings shift place, only there the Seine really winds around. I proceeded as I would with an “easel” painting, with underpainting…Lady Liberty almost 7 feet tall looking like a swaddled mummy in large white brushstrokes, buildings in grey and brown with a roller (vertically), and then the Brooklyn Bridge and what we used to call the Triborough. Only problem was, the piers for the bridges couldn’t stay in the water, and I didn’t know how a large taxi was going to work as it did in the other mural.

But that wasn’t all. To do 50 plus feet of buildings was, shall I say, massive. Also, unlike a theatre set, the audience was not going to be out in the theatre, at some distance from the stage–but sitting right next to it!  Horrors! How to fulfill two totally different points of view and impossible perspective as well!  I did so much research, and prayed to be able to see a solution. It seemed clear to me that it had to be somewhat “impressionistic” rather than illustrative like the other mural, which had a kind of Norman Rockwell character. I had scores of ideas, using spray paint, day at the front and night at the back….But I was led to establish a rhythm that would keep the viewer’s eyes moving in a pleasing choreography, up and down and horizontally. I put lights on the bridges and the crazy taxis. Talk about suspension of belief, this was it. All built up in layer over layer as I painted. But the owner thought I could do it in three days. Then the floor was torn up, and then I had a few days where family concerns kept me from working. After two weeks he declared I must finish by the end of the week;, and that was that. 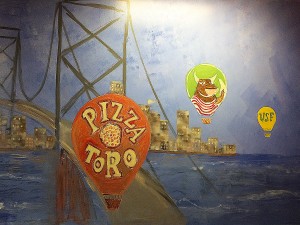 When I went over the day I was supposed to have finished, I still had elements that I had not put in. And to add interest and advertising, I invented hot air balloons, which the owner had seen in a large painting with Pegasus, which I had done for a show at the airport. It solved many problems, created even more space, and I was able to put his logo on the three largest as well.

I really felt that I had done what I could, but actually I had to stop every three hours to be able to proceed from step to step. When my wife went back to present the invoice, she took one of my best critics, and artist in her own right and a wonderful composer as well. I call her ” Good Eye,” after Dick Dead Eye in “The HMS Pinafore,” because she always says exactly what she thinks about anything I do. When they came back to the studio she was ecstatic and couldn’t stop the accolades. “I’m a New Yorker; and it was like I was there!”  That was a great help to me. An artist is always thinking how to improve, to grow and reach new heights. I went from a faded dandelion to a dewy rose!  Thank you, Good Eye, I said…thank you!

The pictures that accompany this blog are not the finished work…I still have to go back and sign it and take  pictures with the restaurant furniture installed. But you will see how the project unfolded.