What Happens When I Photograph in the Garden? 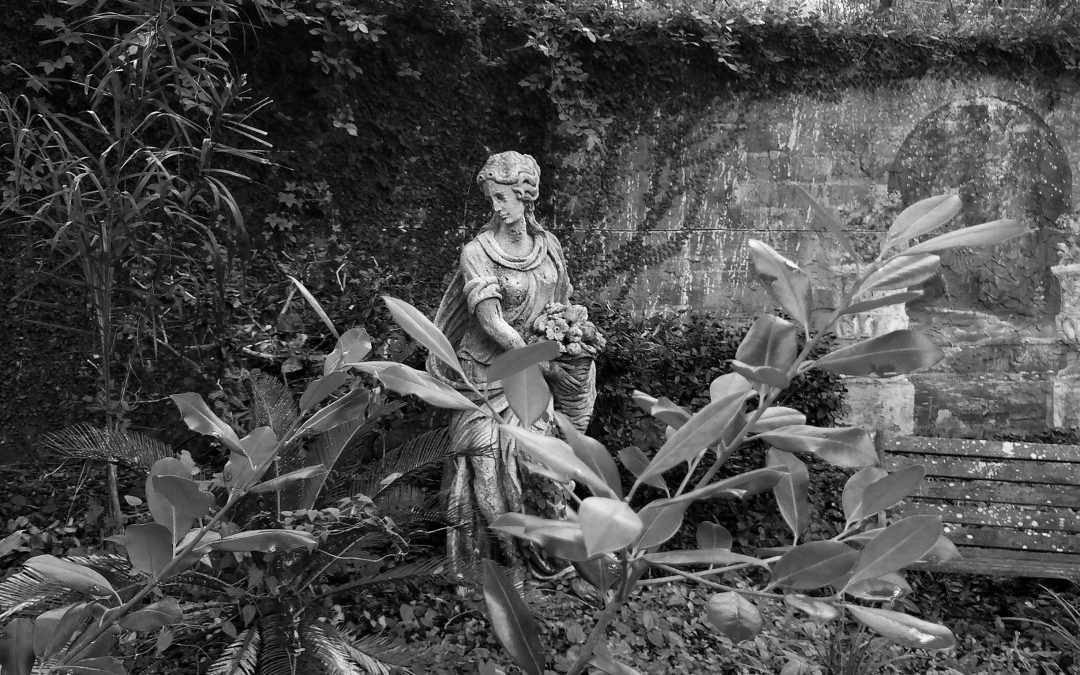 Here’s the nitty-gritty if you will. To maintain any “garden” in Florida is a huge challenge for several reasons. Mostly we are on sand over limestone to begin with. Second, there are periods of drought as well as flooding. Thirdly, we go from high temperatures to occasional frost. Also, everything keeps growing without a respite, so there is no real “down time” as northern gardeners have to relax in front of a fire and dream of what to do next.

However, we get to be out in the garden most of the year, enjoying the color, the abundant wildlife, and awesome natural phenomena in full moons that have telescopic clarity, clouds that eclipse even Tiepolo’s grandiose baroque theatrical skies, fragrances that go beyond the Paris perfumeries, bird arias that range from peacock shrieks to the deep base note of owls’ questioning “who’s?”

But I have permanent guests in the garden with whom I converse, and are “anchors” in the garden’s structure besides the stone paths and boxwood topiary. They came from somewhere in Europe around 100 years ago, and the limestone embedded with tiny 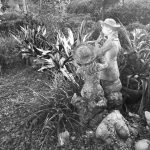 petrified shells keeps eroding every year, just as Venice keeps sinking slowly into the Adriatic. I think the statues might come from the Dolomites northeast of Venice.

Left alone, these denizens of the garden would turn black from mildew and moss, so they must be gently cared for several times a year. Thanks to Lavoisier, who discovered chlorine’s mildew eradicating properties, they shift into almost white to yellowed camembert, a soft pale green, and a charcoal tint. The last is picturesque, but the intricate details of shoelaces, dead pheasants, and the lute player’s little dog are difficult to see.

And, like the exquisitely posturing tree limbs, they are enlivened by the sunlight as it rises above the emerald oak canopy and ultimately sets in the cypress swamp beyond the garden wall. Oh, it’s a lot of theatre in a half acre that keeps me active as the “property manager.”

The camera has its own way of seeing all this as I become excited about the ever changing effects of light due to the changing seasonal arc of the sun, the artificial light at night, and the subtleties of moonlight. It is exciting! And then, as I change the color files into black and white, the garden takes on a timeless character that makes me think of European post cards from the early 20th century, with horse drawn carriages, men and women in fashionable hats and “costumes.”

I am getting ready to go out and see what happens in a “plein aire” situation after years of this photographic obsession, because it will be so different from the camera’s images. The weather is cooler for the first time since March, and the mosquito attacks are getting less frequent.

As the lion said in the Wizard of Oz, “I’m afraid.”  But what the heck, I’ll go out and tackle it anyway!